AutumnD
Alberta Beach, Alberta
My name is Autumn Domoslai. I am an author, artist and teacher. My daughter and I live at Autumn Hollow Sanctuary. We started out offering sanctuary to rescue animals but have evolved. Now we offer sanctuary to those who need to just get away for a bit of time, to listen to the wind and catch a bit of sun on their faces. We operate by donation. We also teach courses in herbal healing, survival, Earth rescue and animistic spirituality.

Chester's Journey and other updates... 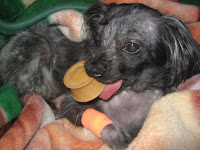 Well, the boy has gone through his fourth chemo treatment, so he only has one left. The picture is him on Monday after we returned from the vet. He's still pretty sedated here and his needle booboo is still wrapped. He isn't completely bald now on his head. He's sprouting some kind of wild boar fur that is very prickly at the top. This is what he does when he's sedated. Lays in front of his warm wooby (his heater) and holds his puck in his mouth. He's hanging in there pretty well and is in complete remission. I don't want to think about anything further than that. I'm just happy to have him here to hog the bed. He's a master at that.
I think everyone is a little snow weary now, but I'm not minding it that much. This whole journey with Chester has taught me to just let the days pass slowly as they will and not wish for the future to come too quickly. Because it will. There are things in the future that I'm not all that anxious for. I do look forward to getting my hands into the soil again. The herbs and weedy ways are stirring and calling and I'm afraid I must heed the call. We made a really nice rose-geranium lip balm yesterday. I find we're going through the stuff like crazy, it's so dry. I'm feeling a little mummified, actually. We also did a batch of offering incense made with 1000 year old tobacco that we grew here, sage and patchouli. It will be for sale through the Etsy store or you can call us and we'll hook you up.
I have found myself a little nostalgic the last little while. Probably most parents do when they realize that their child is about to graduate. It's such a life passsage. We have to send in the sizes for Twyla's cap and gown this week and do all of the arranging for the whole thing. Then, shortly thereafter she will turn 18. I was telling her that the day we brought her home, I said to Brad, we'd better be careful because she will turn 18 tomorrow. I think we have been careful. I think she's turned out to be a human being that I am proud of. I know intellectually that the day she turns 18 she won't be this other person. She still has a long road of school ahead of her, but it's a milestone. Like, we accomplished something. If you know Twyla, you know we did.
I've just had the worst gawdawful migraines for about three weeks now. It's like torture when they cluster and really takes any enjoyment out of life altogether. It hasn't stopped me noticing that we have entered a time of extreme weather that is only going to escalate. It's not like there were no warnings. Now the piper has come to be paid. I would offer advice but I don't really think people are interested in listening. They either give the "Oh, there's been extreme weather before" song and dance to which I just shrug and say "whatever" because I can't be bothered to argue with them or they figure scientists/government/ignoring it will fix it or they belong to the extreme right and live in a constant state of denial about anything remotely sensible.
I just want to say, pay attention.
So there you have it. Please check out the Etsy store. We really appreciate the support:
www.etsy.com/shop/AutumnDomoslai
Hang in there. Spring is coming. If you listen carefully, you will hear Her stirring, even when it snows...
What's on the menu: Maybe meatpie
Listening to: Bellowhead
Reading: Entangled Minds
Goals: Clean the studio and making more incense
Viewing: Ghost Hunters International
Posted by AutumnD at 7:04 AM